ecclesiastic arches in the station

I went to Bristol for university and I thought that was a pretty town! Antwerp is full of seventeenth and eighteenth century architecture – a period when the city was wealthy and a centre of trade.

Vincent asked me if I wanted to go to a Bosnian restaurant. He’d been a few times and it was pretty good. I told him no, I wanted only Belgian. Enough time to wax lyrical about Bosnia when I visit Bosnia, but now I’m in Belgium and when you’re in Belgium, do as the Belgians do (I think that’s the phrase, right?), I told him!

So we sat down in the most Belgian restaurant Vincent could find and I ordered a beer, because I’m a man and that’s what you do. You expect to receive a cylindrical container from which you chug it down and let out a refreshed sigh.

Not in Belgium. Instead, I got this:

It was like an hourglass that had gone wrong. The first question that comes to mind is how do you pick it up? You don’t want the social embarrassment of not being able to pick up your drink properly and you know that out of social custom, you will be required to pick up the drink soon. So quickly your brain looks for solutions. Luckily, on this occasion, the solution was clear: you use the wooden pillar.

Now, there are two great things to know about “Kwak”, the Belgian beer in front of me.

Firstly, according to rumours that are definitely true, the wooden stand was designed for coachmen who couldn’t wait to reach their destination to finally drink a beer. They needed a way to have a cool drink while they’re on their way without it breaking or spilling. Thus the hourglass-shaped glass and the wooden stand were born.

Secondly, according to rumours that are almost certainly not true, the beer was so named because as you are driving along in your coach and having drunk half the beer, “Kwak” was the sound the beer made in the glass. It just so happens that the inventor of Kwak was a man called Pauwel Kwak, an 18th Century innkeeper and brewer.

Thirdly (because who’s counting anyway?), and what may interest you most, you uncultured swine, is that it’s really strong. 8.4% alcohol! So you can have just a few before you’re ready for your traditional awful British dancing, which every other Brit would cringe at if they saw you at it.

“He doesn’t represent me!” they would say. But he does…

Shortly after the beer came and I had figured out how to pick it up, my main course came: Belgian rabbit.

They love their rabbit in Belgium – it seems to be on every restaurant’s menu. I don’t know whether it’s their big round eyes or the cute way they jump, but Belgians love turning little fluffy bunnies into really quite delicious meat. The dish was covered in a thick red wine and cream sauce, which gave the meat a delicate, gravy like flavour. It’s called carbonnade de lapin à la flamande. Follow this link to find out how to make it.

No, I don’t have a photo of the rabbit because I didn’t think about it, but here’s some more photos of Antwerp to keep you quiet:

That is the town hall, in the town square. Apparently, Antwerp has 180 nationalities living in it and the flags on the building represent some of the most common ones.

Antwerp: origins of the name

“What’s that in his hand?” you may be asking. If you thought it’s a hand, you’d be right. He’s throwing a huge hand somewhere at a really awkward angle.

In this photo, you see a guy who’s standing on top of this mini castle and lots of naked women, who seem to be in the process of collapsing in a heap. Here’s a close-up:

And he had good reason to. The man on top of the mini castle is Brabo, a young Roman soldier, and the hand he’s throwing belonged to a giant, who guarded a bridge on the river Scheldt and forced people to pay up if they wanted to cross. If someone refused, the giant, whose name was Druon Antigoon, would sever his or her hand off and fling it in the river. Brabo had had enough of this and severed the giant’s own hand off and threw it in the river.
…and that’s where the name of the city comes from. “Ant” means hand and “werpen” means ‘to throw’. It’s the city of throwing hands into the river, which somehow didn’t put people off from trading there.
Now, if that’s 100% historically accurate, I cannot say. Some people say the name comes from an ‘t werf, meaning ‘on the wharf’, but those people are boring.

The next day, I insisted that we venture into town again, this time in search of the best chocolate and waffles money can buy. Vincent shrugged and acted like he didn’t care and was too modern to be proud about something as silly as a waffle. But I knew he did. The day before, my rabbit had arrived with french fries, which I had assumed came from France. The hurt in his eyes was clear and he proceeded to tell me how french fries were first invented. Of course, I don’t need to tell you that here, because you’ve already read Saucy Dressings’ article all about it.

So into town we went, with the city more beautiful with every block we passed. And in the little winding streets…

…we found a café Vincent had gone to since he was a child.

Désiré de Lille café is a restaurant that’s been run by the same family for over one hundred years. And they have a pond inside with some huge fish. But the reason we were here was for the waffles…which I didn’t take photos of, but I promise you were delicious.

But don’t worry, concerned reader, I was in Belgium. That night, I came back to Vincent’s house and his father was cooking up some tasty waffles of his own!

As you can see, I did take a photo of those, with Belgian gin and a very suspicious-looking bottle of clear liquid next to it. I’ll let you guess what that is.

Of course, I wasn’t going to travel six hours back to Hamburg without first buying some chocolate.

Ironically, the best chocolates in town, according to Vincent, were originally made by a Greek immigrant called Leonidas, who first produced his chocolates in the US. But to be fair to Leonidas, he founded his brand (inventively titled ‘Leonidas’) after marrying a Belgian girl called Joanna Teerlinck and his company took off after he impressed the Belgians so much with his chocolate that he won an award from them in 1910! Since then, the recipes and knowledge has been handed down from generation to generation.

The store is filled with lots of little chocolates of different flavours and you choose from different sized boxes. Even if you choose the mini box like I did, you still have to individually choose 20 different chocolates.

Men were not made for such choice. Making us use our tiny brains to make so many important decisions is cruel, especially with a line of other tourists waiting as you dither on chocolate number six. But the end result is worth it. I decided I would wait until we got home before I would open the box. So, naturally, 36 seconds later, I dug in.

There is a difference between the chocolate you eat from a normal shop in Britain and a Belgian chocolate. You can practically taste the pride that has gone into it. The taste is so pure, you know there are no artificial additives. It’s like having a meditation in your mouth.

A city of beauty and history

Early the next morning, after some glorious British tea, I was on the road back to Hamburg. It wouldn’t be an exaggeration to say that I was frankly staggered by Antwerp’s beauty (including its people!), its history and its culture. The Antwerpians have a relaxed cafe culture typical of continental Europe. When an art gallery started to flood near the red light district, the whores and their clients rushed to save the priceless art. No art was stolen, and it was a touching story demonstrating the togetherness of this community.

The cathedral, being Catholic, is still painted and you can still see some of the original paint from the 15th Century. Before I left, Vincent told me I hadn’t seen half of it yet and I believe him. The Belgians may not shout from the rooftops about the glory of their culture like other nations (don’t look at us Brits, I was talking about the French!), but theirs is just as old and deep as any other, and if that doesn’t persuade you, go for the waffles and chocolate.

Just keep your hands in your pockets and you’ll be fine.

Cru, in Kanaal, a supermarket which has the best food from all over Belgium.

Polâne, for the best Belgian bread. 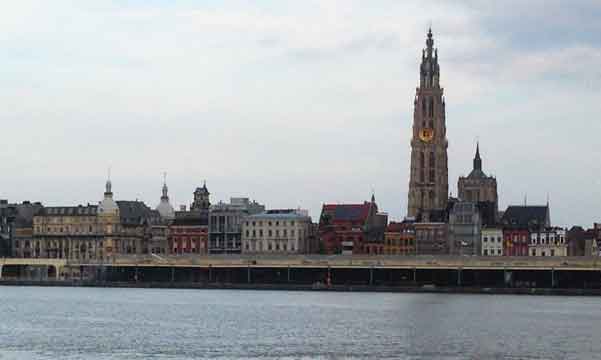 Who would have thought that I would get a really good idea of a Belgian – or Dutch – classic dish such as Carbonades Flamandes…
Clare - Belgian , Cuisines , Main Ingredients , Mains , Meals and courses , Meat , North Europe , Recipes
Read More

A History of Belgian Frites

“‘The frite is an intangible cultural heritage. It is a tradition that [Belgians] have frites once a week. We are asking people to increase that…
Clare - Belgian , Cuisines , Culture , Expertise , Experts , Foodie knowledge , History , North Europe , Recipes
Read More

Musings on Belgian Frites and How They Are Made