4. Open it out and lay it on a board between two big sheets of clingfilm. Bash it with the rolling pin to get it very thin – it will be about twice the size and half the thickness it was. Take away the clingfilm and lay the chicken back on the board. 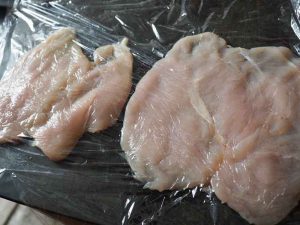 5. Make the stuffing by mixing the mince, the mushrooms, the cream cheeseand half the shallot. Snip in about a third of your parsley.
6. Put the remaining shallot into a small saucepan together with a walnut or so of butter and the garlic. Fry gently until it just begins to soften – three or four minutes.
7. Meanwhile, lay some of the stuffing along the length of the flattened chicken, you will find you only use about half of it, and roll up each piece of chicken around it so that it overlaps itself by about an inch (couple of cm) or so. You will have a couple of sausage shapes.

Roll up around the stuffing until it’s just overlapping

Bind tightly in clingfilm, twisting the ends
8. Wrap the two ‘sausages’ up tightly in very generously cut pieces of clingfilm – if you don’t have enough clingfilm it will unwind and the chicken may unwind and become dry. Twist the ends tightly to create a sort of cracker shape and then, if possible wind the two ends together.
9. Put the two parcels into the now boiling water, reduce to a simmer (otherwise the chicken will become tough), and cook for twenty minutes. Take out and put on a board when done – keep them warm by covering with foil.

10. Wash the new potatoes, put into a medium sized saucepan, cover with generously salted water to an inch (couple of cm) or so above the top of the potatoes, cover, and bring to the boil. Boil for twenty to twenty-five minutes (depending on size) until they are done. Drain and add a couple of walnuts of butter and a little salt.
11. Add the vermouth to the shallot and garlic, reduce, and then add the stock. Simmer gently for about ten minutes until it is about half the volume.
12. Put the rest of the stuffing into a small oven proof dish and bake in the oven for about half an hour – until the mince is cooked through.
13. Add 180ml/¾ cup of the cream to the sauce, return it to a simmer, take it off the heat, and snip in and stir in another third of your parsley. Set aside and keep warm.

14. Add a couple of tbsps. of rapeseed oil to a wok and heat.
15. Shred your cabbage quite finely.
16. Add the cumin seed to the wok, and then add the shredded cabbage. Add a generous amount of salt and snip in the rest of your parsley.
17. Stir fry for three or four minutes, then add 60ml/¼ cup cream. Stir through to warm the cream, set aside and keep warm.
18. Carefully unpack the chicken, keeping its sausage shape intact. With a VERY sharp knife cut down through it, slightly on the diagonal, into slices approximately 1” (couple of cms) thick.
19. Arrange on plates, pour over the sauce, add a desert spoon or so of the stuffing on each plate, the cabbage and the new potatoes. 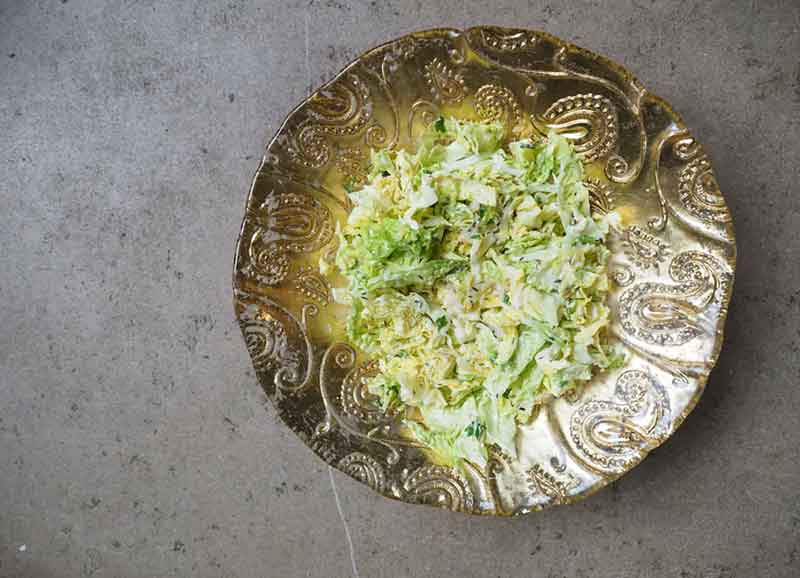 Christmasy chicken with a raisin and vermouth sauce

This is a very good winter recipe, especially good in the long run up to Christmas as the raisins and cinnamon echo the mince pies…
Clare - Main Ingredients , Mains , Meals and courses , Poultry , Recipes
Read More

The Saucy Dressings team was feeling in need of comfort as the following day we had to take The Lady Margaret, the harp, back to…
Clare - Main Ingredients , Mains , Meals and courses , Poultry , Recipes , Sauces and preserves
Read More