The fresh juice that comes out

Adding in the essential lime 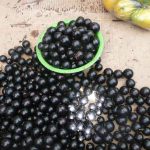 And talking of caipirinhas… the next fascination was a fruit called a jabuticaba – it looked like a large black grape, or black olive. It grows around the bark of the Brazilian grape tree. It’s eaten raw – a little sour, and also used to make a fruit wine, or spirit. And it’s sometimes substituted for the lime in a caipirinha…. Can’t imagine it’s quite the same marriage made in heaven though. 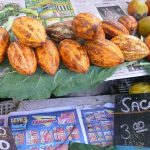 Cacau is the Portuguese name for cocoa – so this is the ‘fresh’ cocoa pod – the container that holds the beans.

Keen chocolate lover that I am, I also had high hopes for this. Dashed again! All you can do is nibble at the slimy white pith around the hard beans. A lot of work for not much reward. 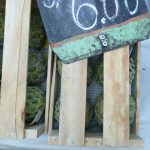 Then there were some intriguing fruit which looked like hand grenades. And unlike all the other fruit in the market, which was displayed in generous heaps to be freely squeezed and smelt and tested, these seemed, like hand grenades, to be kept in crate cages.

These, I learnt, were custard, or sugar apples. It’s well-named with sweet, creamy flesh, which does, indeed, taste a little of custard. It breaks open easily when it’s ripe. 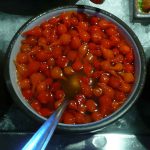 There was a plethora of chilli peppers, including the little heart-shaped biquinho peppers. I’d come across these before in the churrascaria I visited, where they were served, pickled, to go with the meat. They aren’t hot, it’s easy to nibble away at three or four without exploding into a haze of red.

…. and then, at the end, after stall after stall of fruit, vegetables, cheese and fish we came to the tapioca stall doing a roaring trade. What is a tapioca – it’s basically a sort of stiff pancake filled with whatever you fancy – cheese and ham, shredded dried beef and mozzarella; or you can have sweet ones with condensed milk and coconut, or banana, or all three.

They are simply made: the moistened tapioca starch is put straight into the frying pan – no eggs, milk, batter etc. The starch is extracted from the cassava root – and that is the hard part, preparing the flour is, quite frankly, pain and grief, to say nothing of the extraction process. The men do the hard grind – literally grinding the starch through a sieve. It was the Brazilian winter when I was there, but the temperature was in the nineties and it looked like very hot work.

It’s a hard toss up between a tapioca as a hunger-pang-staver-off, and a pastéis, but I went for pastéis, 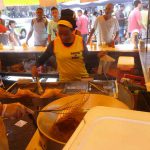 These were being made at the same stall as the sugar cane juice. Essentially they are envelopes of crisp pastry stuffed with cheese, or minced beef, or heart of palm, and then deep-fried.

A type of aubergine, but very very bitter. Children hate it – worse than Brussels sprouts!

A colourful experience for all the senses!

We’ve just come back from Brazil, and, while we were in Paraty, just south of Rio, we stayed at the Pousada do Ouro –…
Clare - Brazilian , Cuisines , Culinary skills & styles , Expertise , Foodie knowledge , Gourmet gifts , Latin America , Places to stay , Recipes , Specialist ingredients , Weird and wonderful , Where to Eat, Drink & Stay
Read More

In this post: Introduction – how I discovered the achiote tree Annatto as a dye Culinary uses of annatto Where does…
Clare - Brazilian , Cuisines , Expertise , Latin America , Recipes , Specialist ingredients , Weird and wonderful
Read More

“And those caipirinhas at Galeto Sats! You get a lot of bang for your buck.”Tom Le Mesurier, Eat Rio In Rio recently we…
Clare - Brazilian , Cuisines , Latin America , Main Ingredients , Mains , Meals and courses , Poultry , Recipes
Read More